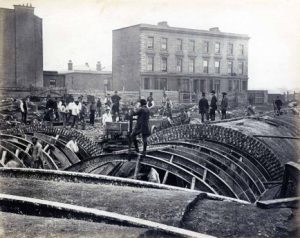 Those of you that know me well will be familiar with my comparisons between attitudes to data and attitudes to health and safety.

In this post I will expand on these themes and consider how modern organisations could be considered as having a ‘Victorian’ attitude to data quality.

If we consider the example of when most railways were constructed during the 19th Century, then the approaches to health and safety were nowhere near as advanced as they generally are now. Accident and fatality rates were far in excess of modern levels and probably would be viewed as scandalous if they were to be repeated today. If there was a fatality, or serious injury, then there would be a lot of remorse and sorrow about this personal event, yet people were used to these accident/fatality rates, so the view would have been ‘this is regrettable, but that is the way things are’.

When comparing the approaches between data and health and safety, there are a number of parallels, not least is the fact that there is no single ‘silver bullet’ that will fix all your health and safety problems, nor is there a silver bullet that will fix all your data problems. In both cases, the approach to improving performance needs to be a part of the management system and culture of your organisation and there will need to be many activities and changes delivered to improve performance.

In the 21st Century, approaches to health and safety, particularly in traditionally high risk areas such as construction, have improved dramatically. No longer is it considered acceptable or ‘just the way things are’ for there to be high accident and injury rates. The Crossrail project in London is a good example of how a sustained drive towards improving accident rates can have tangible results (although there was one regrettable fatality early in the project). The Target Zero initiative has provided a strong and consistent focus on safety. Many of the constituent projects, despite undertaking complex underground construction activities, have achieved sustained low accident rates. This focus on safety has also meant that more planning is undertaken, and potentially modular off-site construction being used in order to avoid the traditionally risky practice of ‘making things fit’ where measurements are not as expected.

So how does this relate to data?

So, what can be done to change this?

There are many things that can be done in order to help change attitudes to data and the overall ways that data is managed. These are areas where DPA can potentially support you:

Want to find out more? Then why not get in touch for a free consultation??