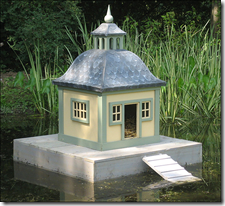 I went to an excellent talk recently by well known English politician Tony Benn as part of the Lichfield Literature Festival. One quotation he provided was the inspiration and title for this blog post

“Information is the best disinfectant”.

The statement on its own may not make sense, but was used in the context of explaining how the publication of information on the abuse of the parliamentary expenses system by MPs both highlighted the problem and created the solution. Once MPs realised that any abuses would be made public, and that their viability as an elected politician may be compromised, many started to voluntarily repay expenses that may have been inappropriately claimed.

For those not familiar with the story, the image above is a “duck house” claimed on parliamentary expenses by Sir Peter Viggers. Not surprisingly, he did not stand in the 2010 election!

So what does all this have to do with data quality?

There have been other similar situations where the provision of information has been a powerful tool to expose and correct wrong-doing in public or private life. Examples include:

Various legislative means have been enacted to try and reduce the risk of such problems in the future including the Sarbanes-Oxley Act, the various Basel Accords (1, 2 and 3) and Solvency II. Although they can introduce extra compliance work for organisations, such legislation helps to reduce the risk of future similar failures.

Clearly, the better quality the data and information in an organisation, the easier it will be to identify and prevent such abuses in the future. Similarly, good quality information can help to defend malicious, fraudulent or erroneous allegations against an organisation.

Data quality and business intelligence professionals should not lose sight of this bigger picture. The data and reports processed on a daily basis, can become very powerful tools when they are linked to other related information. Information, therefore, can be a powerful force for change and a powerful disinfectant where wrong-doing has been identified.