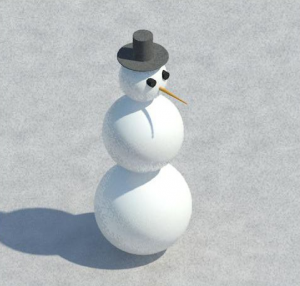 ‘Twas the night before Christmas, and down came the snow

So much came down, that it was not low

Santa had a bright idea, one the kids would adore

Why not build a snowman, all tall and round and grand

But how to make sure the snowman was good?

Two eyes, a nose and a hat

Perhaps that would make it right?

So, this was going to be a BIM snowman just right

Not a 2D flat snowman, but a 3D all round sight

The nose was to be a carrot, all long and straight

The buttons were to be coal, in a line at the front

The elves were to build the snowman

Santa knew these elves were a quality team

So then the snowman would end up like a dream

How the elves would work.

That would help maintain the snowman later

The 4D plan made sure that the head was made after the body.

5D analysis confirmed just how much snow was needed

And the correct number of coals…

But still only one carrot was needed

The elves followed the plan and soon the snowman grew

Santa was really pleased, the snowman was just so

He knew the kids would be delighted

The COBie spreadsheet told Santa which coal was which

The asset ID of the body, the head and the hat

Data on everything in its right place –

Santa knew he could look after his snowman

The snow had stopped falling, but now lay deep and broad

The snowman looked happy in his white home

The children were delighted

The snowman even smiled

The bright sun made the snow sparkle

The snowman put on his sunglasses

But as the snow warmed up, bits began to fall

So, Santa used his data, to make the snowman whole

After an icy week, the weather began to warm

The snowman started looking peaky, his head began to sag

Santa and the kids said goodbye

The snowman was growing small

Soon there was just a puddle

With sunglasses, coal and hat

But of the carrot, you could not see

The squirrels had eaten him for their tea

So BIM looks after your assets

Right through their lives

Even for a snowman, that made the children smile

I know the rhymes are tenuous, but I am more of a data evangelist than poet….