A recent Twitter conversation with Sarah Burnett (a leading UK public sector analyst) was the trigger for this slightly tongue in cheek blog post. Sarah originally posted the following tweet:

Which is an astounding statistic. Sarah and I then the following short discussion: 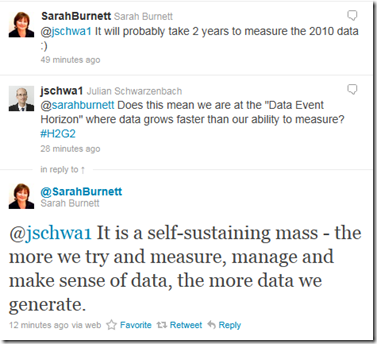 So, have we now reached the “Data Event Horizon”?

The term “Data Event Horizon” has been based upon the “Shoe Event Horizon” concept developed by Douglas Adams in his excellent “Hitch Hikers Guide to the Galaxy” series of radio shows, books, TV and films.

“an economic theory that draws a correlation between the level of economic (and emotional) depression of a society and the number of shoe shops the society has.“

Now, I’m not necessarily suggesting that data will lead to economic or emotional depression (although this could be a possibility). But if, as Sarah suggests, we have reached the point where data is a self-sustaining mass and that the more we try to measure, manage and make sense of it, the more data we create, we may have reached the Data Event Horizon.

How would we know we had reached this point and what might be the result?

Okay, so that got a little far fetched, but how far from the truth is it?

So, to use another Hitch Hiker analogy, if we reach the Data Event Horizon you had better make sure you know where your towel is!