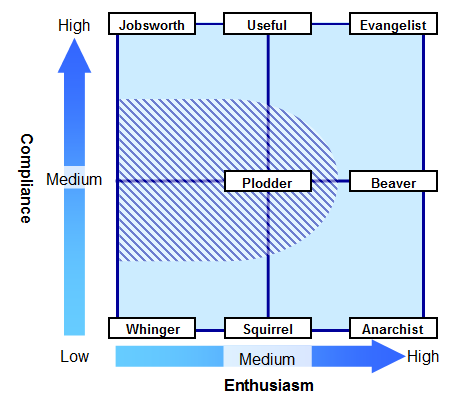 The Plodder often shows little or no energy, they do what is needed, but will tend to just meet/miss deadlines. They will comply with standards, as long as it does not take too much effort. Any problems or errors will be ignored if possible. If the standards do not seem right, or the data does not fit the standard, they will make a “least bad” decision, but not tell anyone about it.

With the right support, they can be encouraged to become more compliant and to see how data can help their organisation, if the input is right. They will not want to be seen as doing a bad job, so if you can show them how to do their job better, then they should be more receptive to new approaches.

They will tend to do an OK job, introducing some data errors, but not want to “make a fuss” or raise an issue in case they receive criticism for it. Often they are the most common data personalities, but you will need to go and look for them.

As they typically want to do a good job, without too much effort, they should be relatively easy to persuade to follow standard approaches, if you can show them that their job will be easier this way.

They can tend to be easily led, so if any of their work colleagues has a strong personality and is one of the other “outer” personalities in the diagram above, then they can tend to get “pulled” in the same direction.

Watch out for the Data Beaver, you will already have seen them in action – fiendishly busy entering and updating data, but very hit and miss whether it is the right data in the right place to the right standard! Similar to real live beavers who may chop down trees that they shouldn’t, dam streams causing flooding and so on.

The Data Beaver is heroically proud of their productivity – “Just look how hard I worked to enter all that data in 12 hours solid”, “I worked until midnight sorting out the data, some of it did not appear right, so I made it right”, “I just bulk imported x,000 data corrections” etc. It’s a shame that they do not always conform to data standards and may correct what they see as “wrong” data without reference to others.

Data Beavers have lots of energy and enthusiasm and are happiest when they are busy. The challenge is to make sure they are doing the right things, at the right time and in the right way!

Data Beavers can wreak havoc on data systems through their enthusiasm to do what they feel is right. This misguided activity can sometimes be difficult to spot and far harder to correct.

Since they are so busy tidying up data, they may not be seen as particularly useful by their colleagues who probably don’t understand what they are doing (often nobody else does either). So the impact on colleagues is not particularly severe, however the impact to data stewards, database/process owners can be far more severe.

It is probably also worth adding at this level the data personality of the Data Ostrich (also referred to as the Dataphobe by James Standen and Phil Simon) – they don’t appear on the chart above because they actively avoid data wherever they can. They prefer to rely on instinct/intuition/gut feeling etc. for making decisions. They will avoid data wherever they can and adopt a macho approach whereby they are proud to operate without relying on data.

The Data Ostrich is often a senior/experienced employee who may have grown with the company from the days when data was scarce to the present era when data is plentiful. They have a wealth of experience and deep technical knowledge.

In the past they may have been so engrossed in the technical intricacies of their role that they did not feel the need to learn about computing and use it as an aid to their role. They may now realise that they need to pick up these skills, but feel they are too old or too busy to learn, so may go to great lengths to show they can operate without data in an effort to hide their lack of computer literacy.

As these can be very strong willed individuals, they may be very resistant to change, but as has been noted earlier, may have deep and extensive technical knowledge which can be of benefit to their organisation. By relying on gut instinct there is a high risk that they may make large and expensive mistakes through poor decision making. If you can provide them with a more IT literate “understudy” to provide them with the Business Intelligence support that they need, then their technical skills can be exploited at lower risk.

The next post in the series will consider the high compliance data personalities, see Part 4.